Le Creuset is a French cookware company that has been around for over 200 years. It began as a family business and now includes several different companies under its umbrella including the store-front Le Creuset, which specializes in kitchen accessories, table linens, serving bowls, and much more.

Le Creuset is a French company that specializes in manufacturing cookware and bakeware. The company was founded in 1925 by Marc and Lucien Muel, who were both potters. Le Creuset currently has over 250 stores worldwide. They make stoneware, enameled cast iron, porcelain enameled cast iron, ceramic, stainless steel, aluminum and copper cookware. 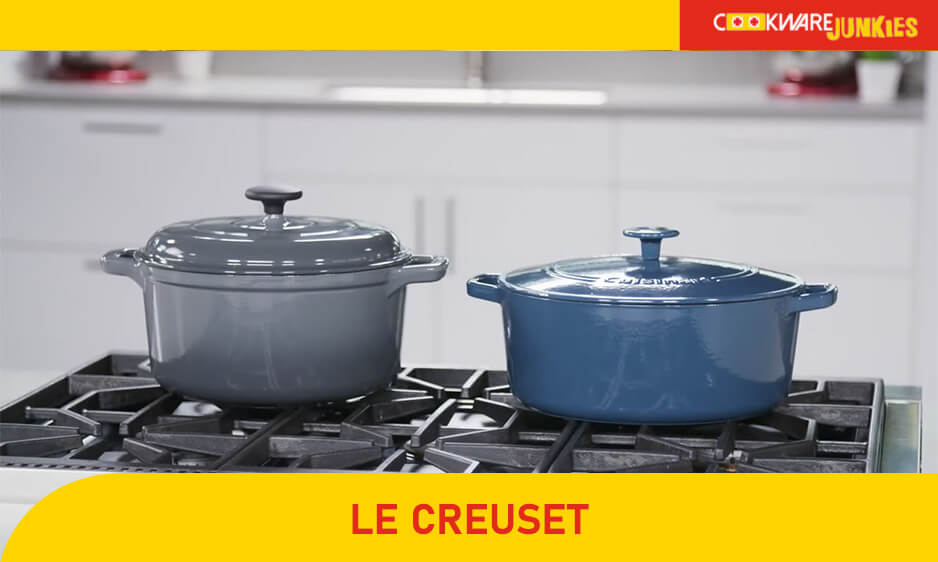 If there is one name that enthusiasts of the classic Dutch oven recognize, it is most certainly Le Creuset. What makes this legendary French brand more appealing than comparable items that cost a fifth of the price when it comes to cookware? 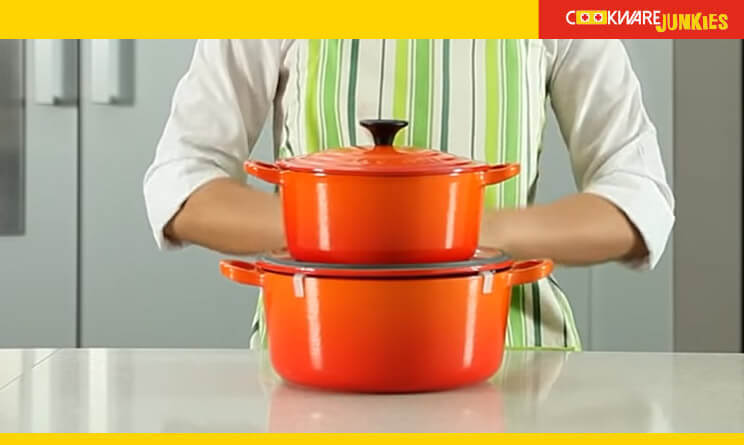 Le Creuset’s worldwide admirers are comparable to how the media likes Elon Musk and his ground-breaking ideas. Le Creuset is always the center of attention, no matter where you go in the globe. For what it’s worth, it’s still a wonder why so many high-quality Dutch oven and cookware manufacturers are overlooked. Is there a genuine distinction between Le Creuset and its enchanted enameled surface? Let’s see what we can find out!

What Was the Origin of Le Creuset? 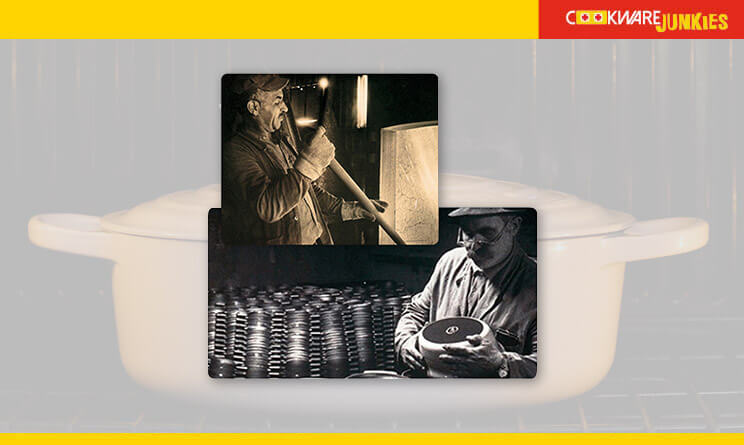 In 1924, during the 5th annual Brussels Trade Fair, two unlikely Belgians met by coincidence. Both of these ambitious entrepreneurs discovered common ground and soon devised a plan to develop a new kind of cookware. They planned to build a unique kind of foundry that would specialize in enamel-coated iron cookware. Although they weren’t the first to do so, they did have one edge in terms of where they chose to set up business.

This place just so happened to be in Fresnoy-le-Grand, which is in the city of Aisne in northern France. Armand Desaegher, an experienced casting master, and Octave Aubecq, an expert in enamel coatings, were the two founders. Their foundry was strategically located at a crossroads trade route that transported three critical raw materials for their product line.

Sand, iron, and coke were among the resources used, giving their new foundry an instant edge in terms of working materials. The first cocotte was made in 1925, and the company gradually expanded its product line and variety of cookware. Despite the fact that the Second World War made life tough for many French businesses, Le Creuset was able to maintain a moderate level of prosperity until 1945.

It wasn’t until the war’s conclusion that the Le Creuset foundry realized how difficult their strategic placement had been. This was the only thing that kept them from going bankrupt like so many other enterprises at the time! They got a second wind when they started making enameled cast-iron cookware for a new market in America. This turned into a thriving company, allowing them to develop and prosper for decades to come.

This development now includes a stronger market presence in a number of nations, with offices all around the world. Those who only associate Le Creuset with color from recent items may be surprised to learn that they didn’t begin adding color to their ceramic coatings until 1945!

What Are The Advantages Of Cast Iron Enamel?

When each Le Creuset pot is created in France, the process is a testament to excellence. Despite the fact that this procedure might have been moved to China decades ago to save money on manufacturing, the firm in France uses the same technology that was developed over 96 years ago. The cast iron is poured into a sand mold and then hand-finished after it is removed.

The piece is then cleaned and coated with enamel before being burnt in a special kiln oven. From start to end, this method may take up to 10 hours to make a single pot and involves more than 12 processes. The facility in Fresnoy-le-Grand can make up to 25,000 pieces every day, which is incredible. If there are any flaws in the castings, the metal is melted down and recycled anew. 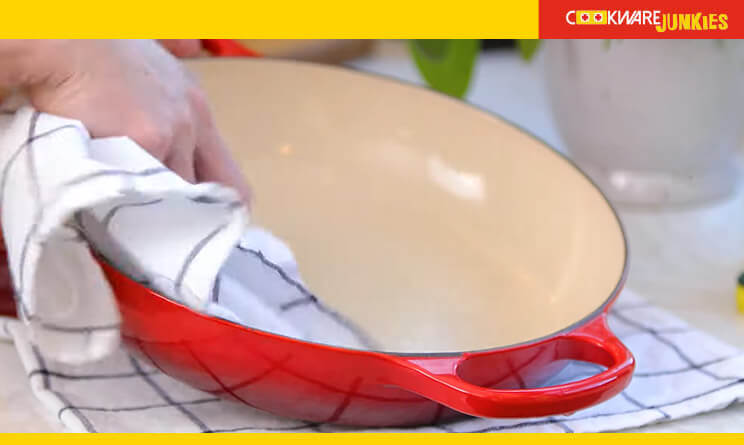 Because the ceramic coating doesn’t attach to cast-iron very well, each pot and cookware item is sandblasted first to make it textured. This aids in the more stable adhesion of the ceramic to the surface. We’ll come back to it a little later in this post for further clarity. This time-consuming technique yields a non-stick surface that is easy to clean and does not need seasoning like typical cast-iron Dutch ovens.

Why Is It Better To Cook With Enameled Cookware?

Because this has a lot to do with the insulation that enameled surfaces may give, the theory behind it is relatively straightforward. If you’ve ever used a thermos, you’ll know that it’s a metal container with an inside glass sleeve. This permits heated liquids to maintain heat for extended periods of time, while the metal also acts as a barrier to heat loss. This is why a Dutch oven is so useful for preparing a wide variety of dishes.

Le Creuset pots and cookware have a long lifetime in domestic kitchens because to the mix of ceramic coating and cast iron. There’s no need to worry about food adhering to an enameled surface, and it’s easy to clean afterwards. As with uncoated Dutch ovens, cocottes, and casserole pans, there is no need to season the surface.

Le Creuset has grown so popular due to the wide range of colors offered that their brand has gained a distinct aesthetic in several nations. As a consequence, you’ll frequently discover that various nations have a stronger taste for specific hues. Surprisingly, since the Pandemic started in 2020, their internet sales have grown owing to increased curiosity and global availability of their items.

Is Le Creuset Cookware Better Than Other Brands? 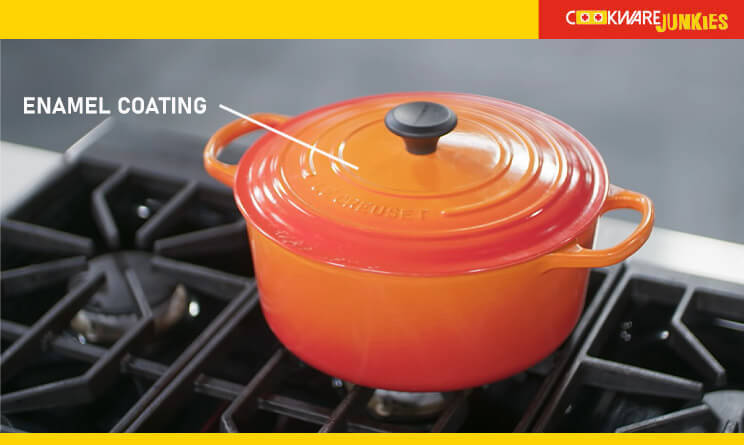 While this is undoubtedly a top-shelf brand with a comparable price tag that demonstrates its quality, there are two points to consider. Enamel coatings are usually a positive, but they do need a great deal of attention. They don’t stand up to heat and high temperatures well, and the enamel covering is quickly cracked. Even if the metal is specially prepared before the coating is placed, it will not endure long if it is subjected to thermal stress.

Because the coating is formed of a glass-based ceramic and comprises glass sand flakes that are thermally fused together. If they get into your meal, they may be quite dangerous, and it’s all too simple to do so by using the cookware incorrectly. If you see cracks or chips, be extremely cautious that they don’t turn into spider web cracks that will only become worse with time.

Le Creuset has a lifetime guarantee on its cookware, so think about how much money you’re willing to spend on a set before you buy. This is not an issue with uncoated cast iron, although it does need seasoning to get the nonstick effect. If you don’t mind putting in a little more work to season your Dutch oven, you may be able to save some money if you don’t know how easily a new pot can fracture due to heat shock.

Le Creuset is a company that specializes in manufacturing cast iron cookware. They have been around since 1926, and are known for their high quality products. le creuset oval dutch oven sizes are the most popular size of their product line.

Can Le Creuset be stacked?

A: Yes, Le Creuset can be stacked.

A: No, Le Creuset is a high-quality brand that has been around for many years. It doesnt have any weak or fragile parts which means it should last you a lifetime

Why Le Creuset is worth it?

A: For one, they are known for their durability and longevity. They use a ceramic-coated interior to ensure that the pots can be used in both ovens, on the stove or even like an electric skillet over your grill. If you want to deep fry something with these pans, its also possible as well due to Le Creuset having a special coating on them which allows food items such as doughnuts and fries not stick when fried so that cleanup is easier!

Our Favorite Ways to Make Tea