One of the most satisfying breakfasts you can make with a few ingredients is French toast. It’s simple to make and always turns out delicious, even if it doesn’t look like much at first glance.

The “best french toast recipe” is for a sweet and savory breakfast that can be made with bread, eggs, milk, cinnamon and sugar. It’s a simple yet tasty dish that everyone will enjoy. 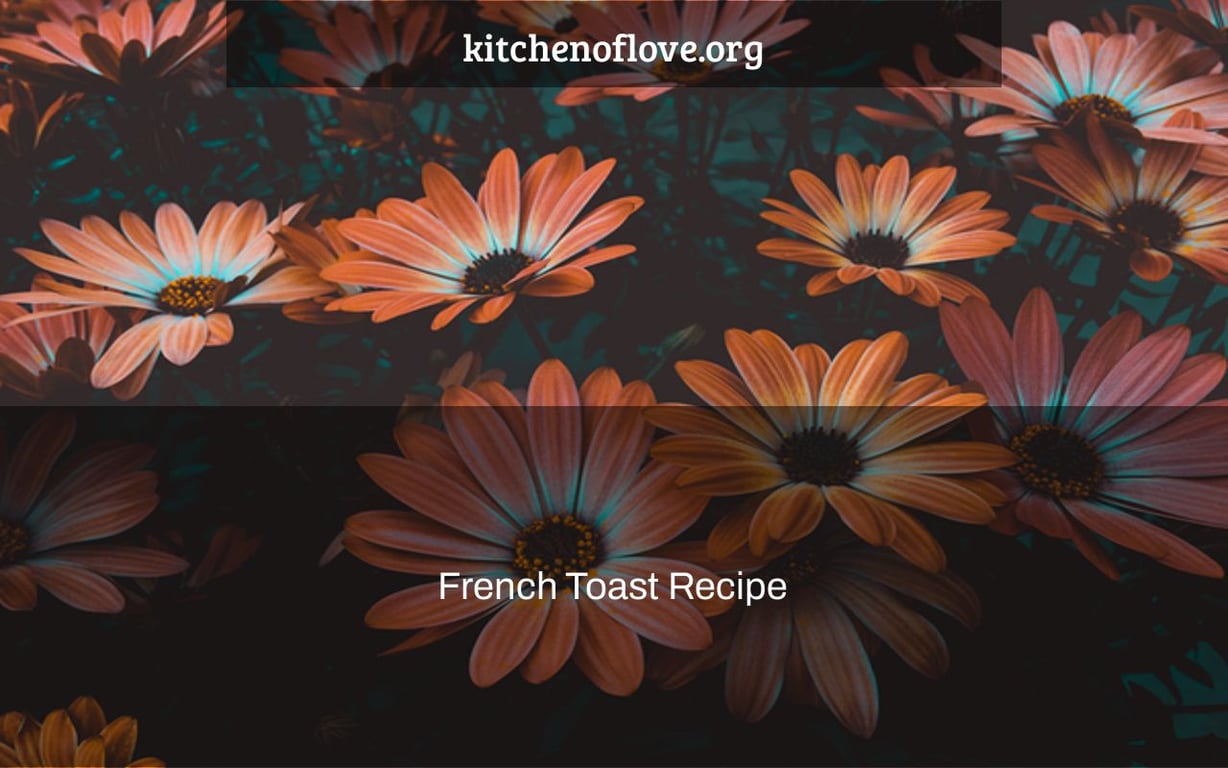 On a quiet weekend morning, nothing beats making a batch of traditional French toast. The middle is creamy, custardy, and fluffy, while the exterior is buttery, crispy, and caramelized. Each mouthful is amazing in every way.

To prepare French toast, all you need is thick bread pieces, eggs, milk, butter, and cinnamon. There are a plethora of delectable French toast options to sample. Serve with fruit, maple syrup, powdered sugar, or jam for a substantial breakfast or brunch.

What is the definition of classic French toast?

French toast has been around since the first century AD. In truth, Romans used to prepare “pan dulcis” by dipping bread pieces in a milk mixture and frying them.

What is the Best French Toast Bread?

French toast is best made using old bread. Indeed, the more staler, the better! Make careful to use several days-old French or Italian bread and cut it thickly enough to retain the egg mixture without becoming a soggy mess. Brioche and challah bread are other excellent choices.

Only a few ingredients are required for French toast, and you most likely already have them on hand.

To begin, get some stale French or Italian bread. Make sure it’s not more than a few days old.

You’ll need eggs, milk, and cinnamon to prepare the batter. Milk adds moisture and fat to the bread, so don’t omit it.

Finally, butter is used to cook the French toast, however oil may be substituted if desired.

Making a wonderful batch of homemade French toast is so simple that even novice cooks can accomplish it. Gather your ingredients, prepare your utensils, and get ready to cook.

Making the Batter for French Toast

To prepare the French toast batter, whisk together the eggs, milk, and cinnamon (plus any other ingredients you choose to use). Fill a small basin halfway with the egg mixture.

Bread Soaking in the Batter

In a large pan or griddle, melt the butter over medium-high heat. Once the pan is heated, fry the battered bread till golden brown on one side, then turn and brown on the other side. Place the cooked French toast on a platter and top with your chosen toppings.

Putting the finishing touches on the French Toast

It’s time to add the toppings once you’ve arranged the French toast on your dish. Simply sprinkling, dusting, or smearing your favorite toppings on top of your French toast, then dive in with a fork and knife!

French toast may be topped with almost anything. Fresh berries or fruit, powdered sugar, maple syrup, nut butter, fruit preserves, Nutella, chocolate syrup, and chocolate chips are all popular toppings. Use your imagination!

How to Keep Warm French Toast

Last but not least, don’t stack the French toast on top of one another. They will lose their crisp skin and become mushy as a result of this.

How to Make the Best French Toast

Use oil instead of butter and plant-based milk instead of whole milk to create dairy-free French toast.

Simply leave out the eggs to create eggless French toast. If desired, a pinch of cornstarch may be added to the milk.

The egg mixture and bread may be prepared up to one day ahead of time.

Make sure your bread is sliced thick enough to absorb up the egg mixture.

Substitute heavy cream for the milk for a richer French toast.

What to Serve with French Toast (Classic)

French toast is often served as a major course during breakfast or brunch, although it is delicious at any time of day. Serve it with a side of bacon, a tiny side of scrambled eggs, a light fruit salad, or some oatmeal, and top it with your favorite toppings like maple syrup, fresh fruit, or powdered sugar.

How to Keep French Toast Fresh

Allow the French toast to cool slightly before wrapping it in foil and storing it in the fridge for up to 3 days. Reheat it in the oven at 350 degrees Fahrenheit or in a pan until well hot.

Is It Possible to Freeze French Toast?

Absolutely! Freeze the foil-wrapped French toast for one to two months in a sealable bag.

In a small basin, whisk together the eggs.

In a small basin, whisk together the eggs.

Pour the milk in.

Add the cinnamon to the mix.

One by one, dip the bread into the egg mixture.

To coat both sides of the bread piece, flip it over.

Add the cinnamon to the mix.

In a large skillet over medium-high heat, melt the butter.

Fry the French toast for a few minutes till browned after the oil is heated.

One by one, dip the bread into the egg mixture.

Cook until the second side browns, then flip it.

Place the bread pieces on a plate.

To coat both sides of the bread piece, flip it over.

Serve with selected toppings and eat as soon as possible.

Make your French toast with salted butter. It will improve the taste.

“Easy French Toast Recipe” is an easy recipe for french toast. It includes a mixture of milk, eggs, sugar and cinnamon that will make your whole house smell like french toast. Reference: easy french toast recipe.

How do I make French toast?

A: You can make French toast by spraying the bread lightly with cooking spray and grilling it on both sides. Once youve done that, spread peanut butter or maple syrup over one side of each piece and roll them up in a cinnamon-sugar mixture before placing them back onto the grill 1/2 inch apart.

How do you make French toast in 5 steps?

A:
1. Pour milk into the frying pan until its half-full of milk and heat up on medium high
2. Stir in a pinch of cinnamon, nutmeg, ginger and vanilla extract to taste
3. Add two cups of flour to the mixture slowly while stirring constantly with a wooden spoon or whisk 4. Gradually add water as you stir so that there is no clumping at all (a little bit at a time) 5. Cook for about 30 minutes

How long should I soak my French toast?

A: You should soak your French toast for at least two hours.